The gift shop and observation deck of the Folly Beach Pier are open to the public while replacement construction continues for the remainder of the pier structure. The new Folly Beach Pier is expected to open in the Spring of 2023. As the former, which opened in 1995, reached the end of its useful life, Charleston County Parks is moving forward with the creation of the next Folly Beach Fishing Pier that will serve our community for generations to come. Follow along with the entire transition here.

A lot of progress has been made on the new Folly Beach Pier. The temporary crane trestle and demolition of the existing pier were completed in August with the last wooden timber piling being removed on August 24. The precast plant has been fabricating new concrete piles and construction of the new pier began at the diamond head. Pile templates have been installed for driving the first 24 concrete piles. The first concrete pile for the new pier diamond head was driven on September 17. The new pier is being constructed starting at the diamond head and construction will continue back towards the new observation deck that opened in May of this year. The new Folly Beach Pier is expected to open in the spring of 2023. 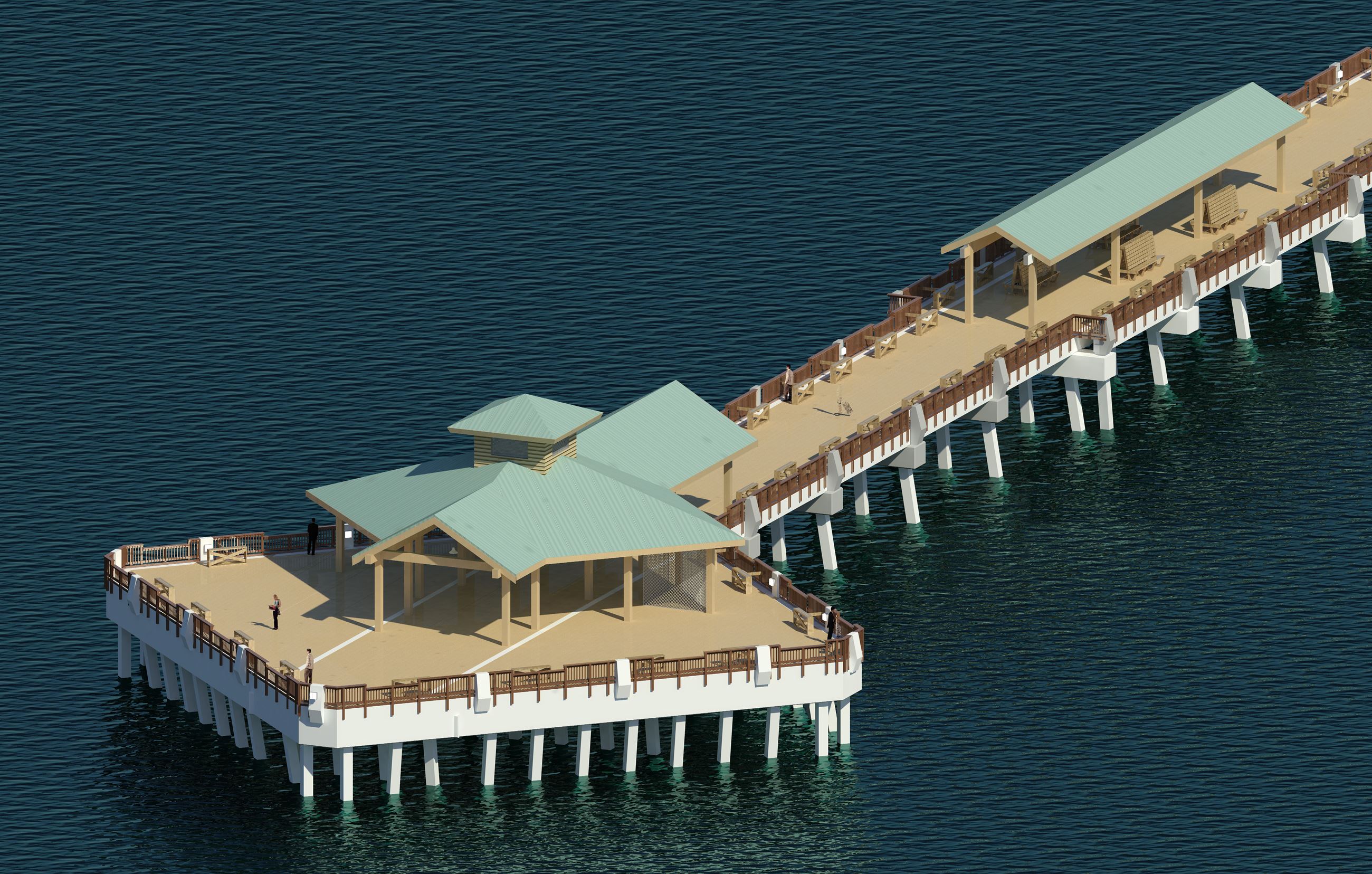 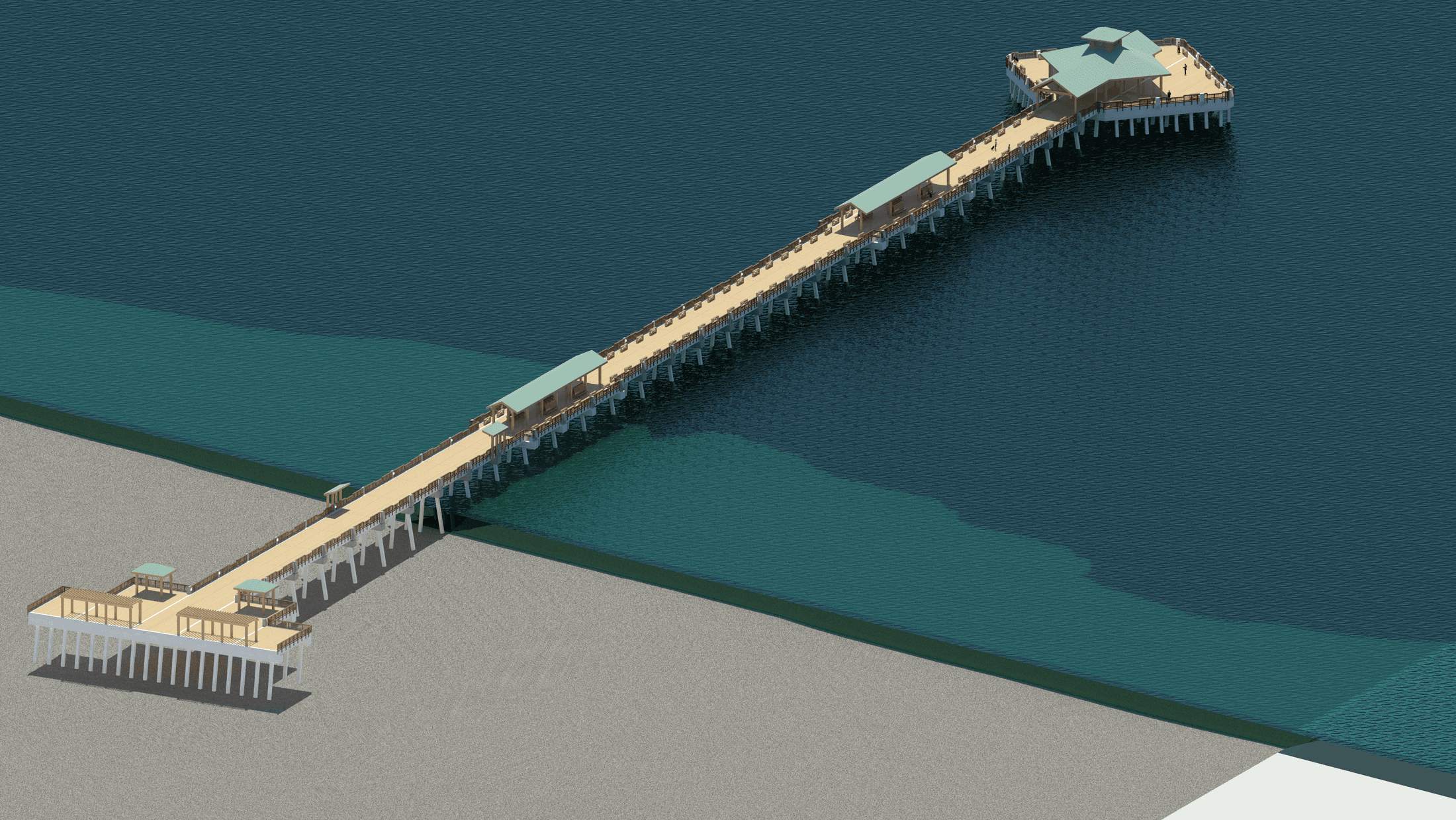 The plan is to do a modified “top-down” construction for the new pier. The “apron” area – the rectangular deck behind the restaurant and gift shop – will be constructed first along with the first few bents of the pier walkway. Contractor Cape Romain will then build a trestle within the pier footprint and begin demolition and construction of the diamond head at the end of the pier. Last, the contractors will build the walkway starting from the diamond head and working back towards the shore.

The contract with construction group Cape Romain Contractors was signed in March 2020.

Significant progress was made primarily to the apron area, the widened portion of the pier that abuts the restaurant and the gift shop. Also occurring concurrently with construction on the apron was the construction of a temporary crane trestle for transporting equipment and material to the diamond head of the pier.

The gift shop and observation deck of the Folly Beach Pier reopened while construction continues on the remainder of the pier structure.

A crane trestle was built using steel pipe piles to enable the removal of the old wooden pier. The crane trestle is a temporary structure that was in the footprint of the new pier, which will be built out all the way to the old diamond head. The crane trestle will be removed as new portions of the pier are constructed.

Closures and Impacts to the Public

The walkway section of the Folly Beach Pier will be closed throughout the entire construction period.

The “apron” area of the pier - which is the rectangular deck area behind the Pier 101 restaurant, the pier’s gift shop, and restrooms - was replaced first and as of May 13, 2021, that area was reopened to the public.

Beach access will be affected at times due to the loading of equipment and material onto the pier.

The pier’s parking is expected to continue to be impacted during the construction period. At this time, limited parking is available to the public.

Why is the pier being replaced?

The current Folly Beach Fishing Pier opened in the summer of 1995 but reached the end of its useful life due to deterioration in the wood pilings caused by marine borers. Timber pile piers typically have an average life expectancy of 20-25 years.

In 2013, we began dive inspections of the pilings, and the most severely deteriorated piles were repaired by an encapsulation process that encased the deteriorated piles in cement. The encapsulation not only killed the wood-eating borers, but it also strengthened the piles and the structural integrity of the pier. The diamond-head has had nearly one-half of the piles encapsulated to ensure the integrity of the pier head for dances, and the walkway has been inspected to ensure it is safe for fishing and sightseeing.

Although the former pier was determined to be safe by our consultants, there were still many piles remaining that will continue to deteriorate further with worm damage.

What to Expect on the New Pier

The new Folly Beach Pier will be constructed using a combination of concrete pilings and wood. It will be reminiscent of the old pier and in the same footprint, but will also offer unobstructed views of the ocean, modern improvements, and a longer lifespan.

Two locations along the pier walkway will be slightly widened, with covered shelters in the middle, to allow additional fishing opportunities and more efficient pedestrian access. The new pier will be designed and constructed using pre-stressed concrete piles, a concrete substructure, and concrete beams, with wooden timber deck panels.

The new pier will offer all of the elements visitors love about the existing pier, including fishing stations, places to watch the sunset, and the beloved Moonlight Mixer dance series. It will continue to offer public restrooms, retail facilities, benches and a shade structure over the pier head.

The original Folly Pier was 120-feet wide, 97-feet long and was a green and white structure built with palmetto tree logs. Known for its sheltered dance floor the size of a basketball court, the pier attracted many famous bands and artists, including Jerry Lee Lewis, The Drifters, and The Coasters. Following a fire at the nearby Ocean Front Hotel, the pier and pavilion area reopened as the Ocean Plaza in 1960 and featured a boardwalk, amusement rides, a roller skating rink, and concessions.

The Folly Pier and pavilion were lost to another fire in January 1977. After the remains were removed and the boardwalk was sold, a Holiday Inn hotel (now Tides Folly Beach) was built adjacent to the site in 1985.

As part of a 1992 bond, Charleston County Parks was able to purchase the 1.4 acres of beachfront property on Folly. Nearly 20 years after the previous pier burned down, we opened the Edwin S. Taylor Folly Beach Fishing Pier on July 4, 1995. Costing approximately $3.4 million to build, the current pier is 25-feet wide and 1,045 feet long.