Your Charleston County Parks feature a variety of ecosystems that are home to many unique creatures. Within our ’Creature Features,’ we take an in-depth look at some of the amazing species you can find throughout the Lowcountry. 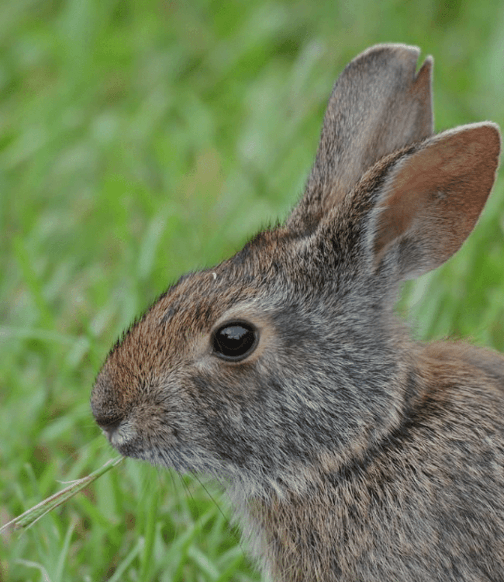 This isn’t the type of Easter Bunny you might be familiar with. This herbivore is dark brown to reddish brown with a dark belly and dark tail. There are plenty of reasons this bunny is a bit of an outsider. Marsh rabbits prefer to shop for their groceries near freshwater marshes and estuarine areas across the Lowcountry. They are avid swimmers and often dive into water as a means of escape! If that wasn’t enough to keep their social distance from humans, they are mainly nocturnal, solitary and often hide in dense vegetation for protection. Do you think you have ever seen one? 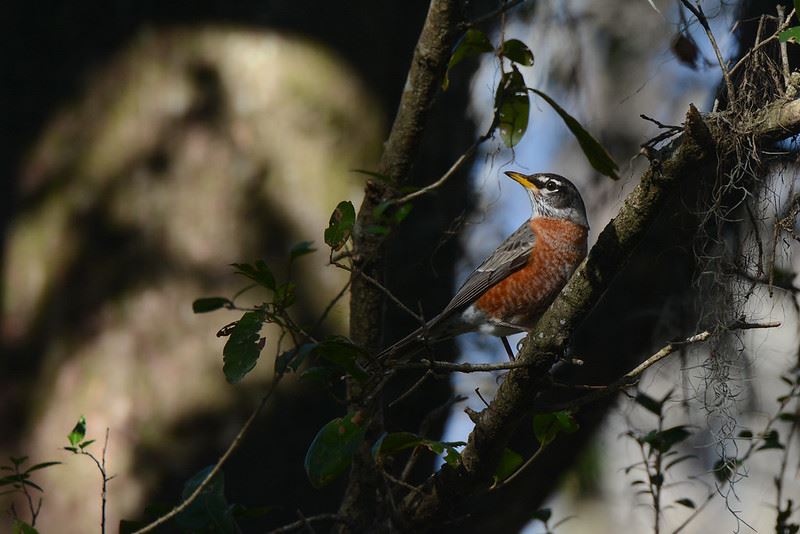 Being a little wet underfoot is quite alright with this American Robin.

Food that might be hidden underground is forced to the surface, making for a park trail buffet. Did you know that the American Robin is in the Turdidae family, which means it is a thrush? Thrushes often forage for insects on the ground, but they also consume quite a bit of fruit as well.

This species can be seen year-round in the South Carolina Lowcountry but can gather in huge flocks in the Winter and Fall. 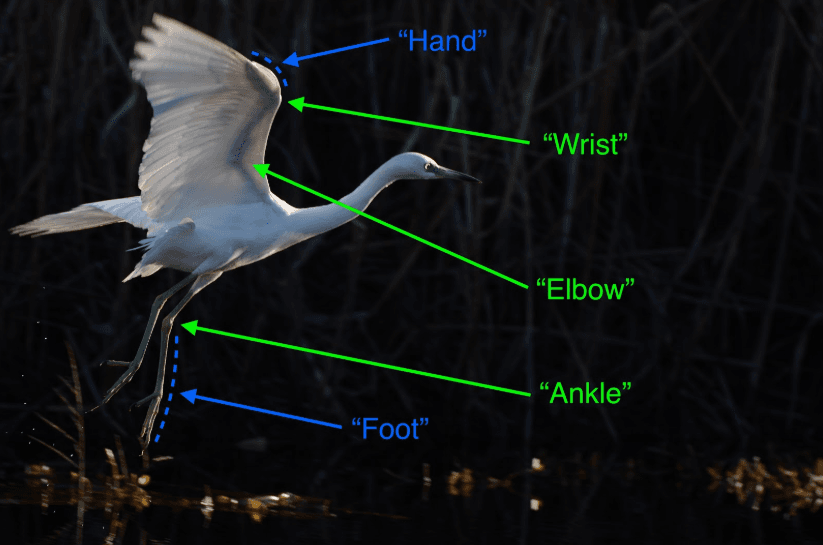 The quick answer is that they don’t, they are forward-bending and are usually hidden beneath feathers. That backward-bending joint that is often easy to see beneath a bird is equivalent to our ankle!

Above the “ankle” and hidden by feathers are the forward-bending knees. Below the ankle you’ll find the group of bones (including the toe digits) that we call the foot. Birds are digitigrade, which basically means that they walk on their toes.

This photo of an immature Little Blue Heron is illuminated in a way that reveals wing joints that are also similar to human joints. The bend in the wing that angles away from the head is the elbow equivalent, and the forward bend marks the wrist equivalent. Extending from the wrist is the equivalent of the hand which contains several bones, including the finger digits. Birds are more like us that we perhaps thought! 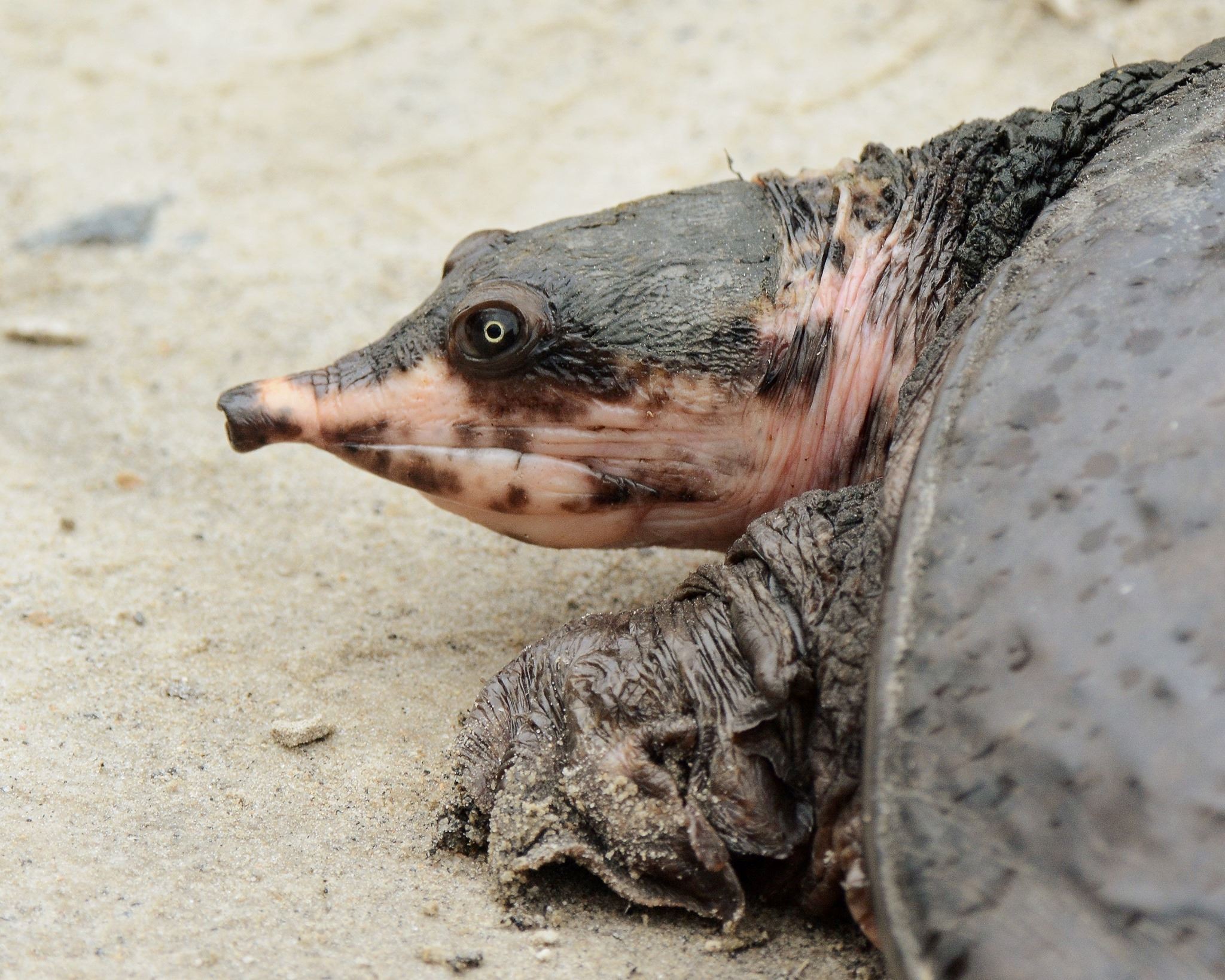 Softshell turtles aren’t your typical turtles. They have a flattened shape and a layer of skin over their shell that makes it relatively soft in comparison to other turtles. The Florida Softshell pictured here has the species name “ferox,” which means ferocious. It’s a demeanor that comes in handy when harassed by predators or when pursuing prey such as snails, fish, or even birds! That snorkel-like nose helps them hide beneath the surface of the water, and the flat shell helps them hide along the bottom as they wait to ambush their prey. The Florida Softshell Turtle can be found in lakes, ponds and other freshwater areas in the southern part of South Carolina’s coastal plain. 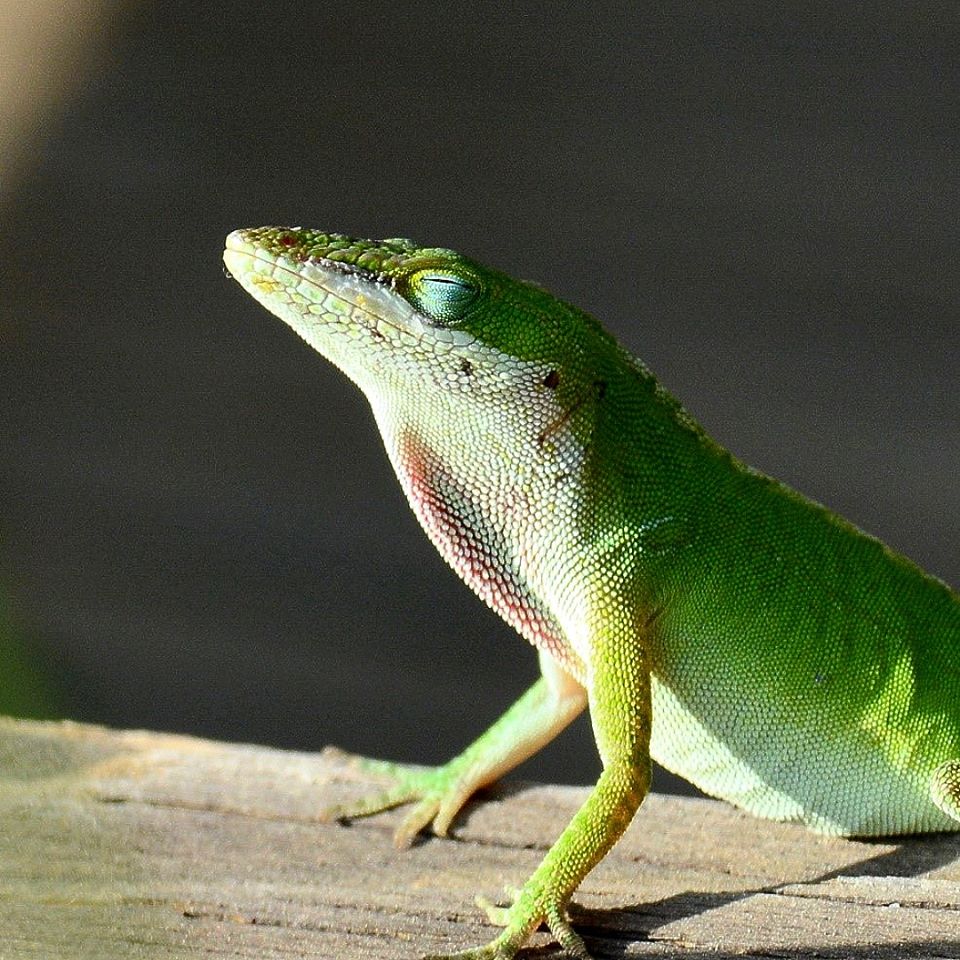 As we follow the advisories and distance ourselves from crowds, we could take a hint from this Green Anole and find a moment to recharge during the onset of Spring weather. This common lizard can change its color from green to brown but is quite different from a true chameleon. Although this color change may be stimulated by background color or mood, Green Anoles are most often green in warmer temperatures and brown in cooler temperatures. Many insects are consumed by Green Anoles, and they can even dine on pests in your garden! 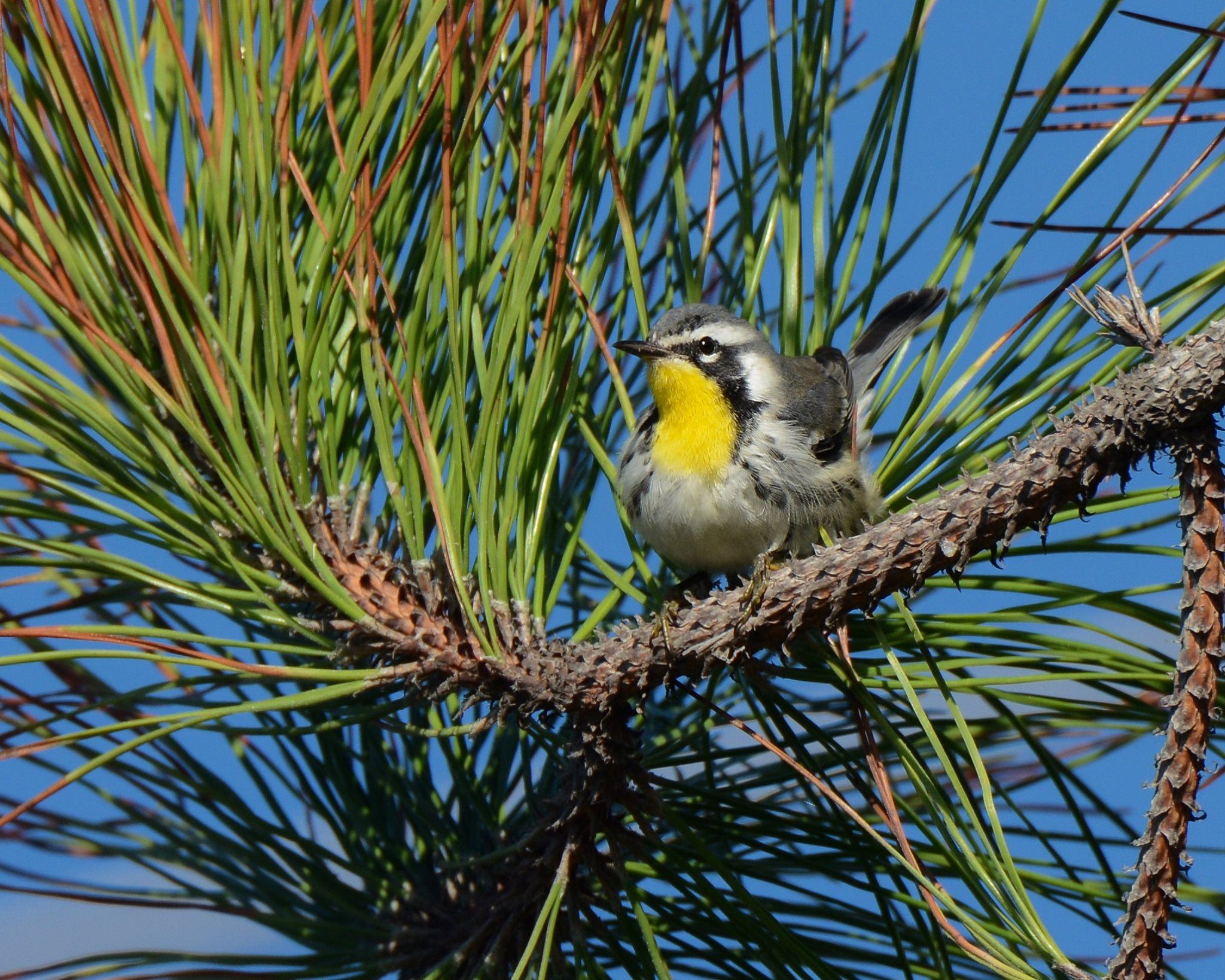 The Yellow-Throated Warbler is considered a relatively understudied bird in part because its nests are hard to find in the canopy. In the Lowcountry, they sometimes nest in clumps of Spanish Moss. 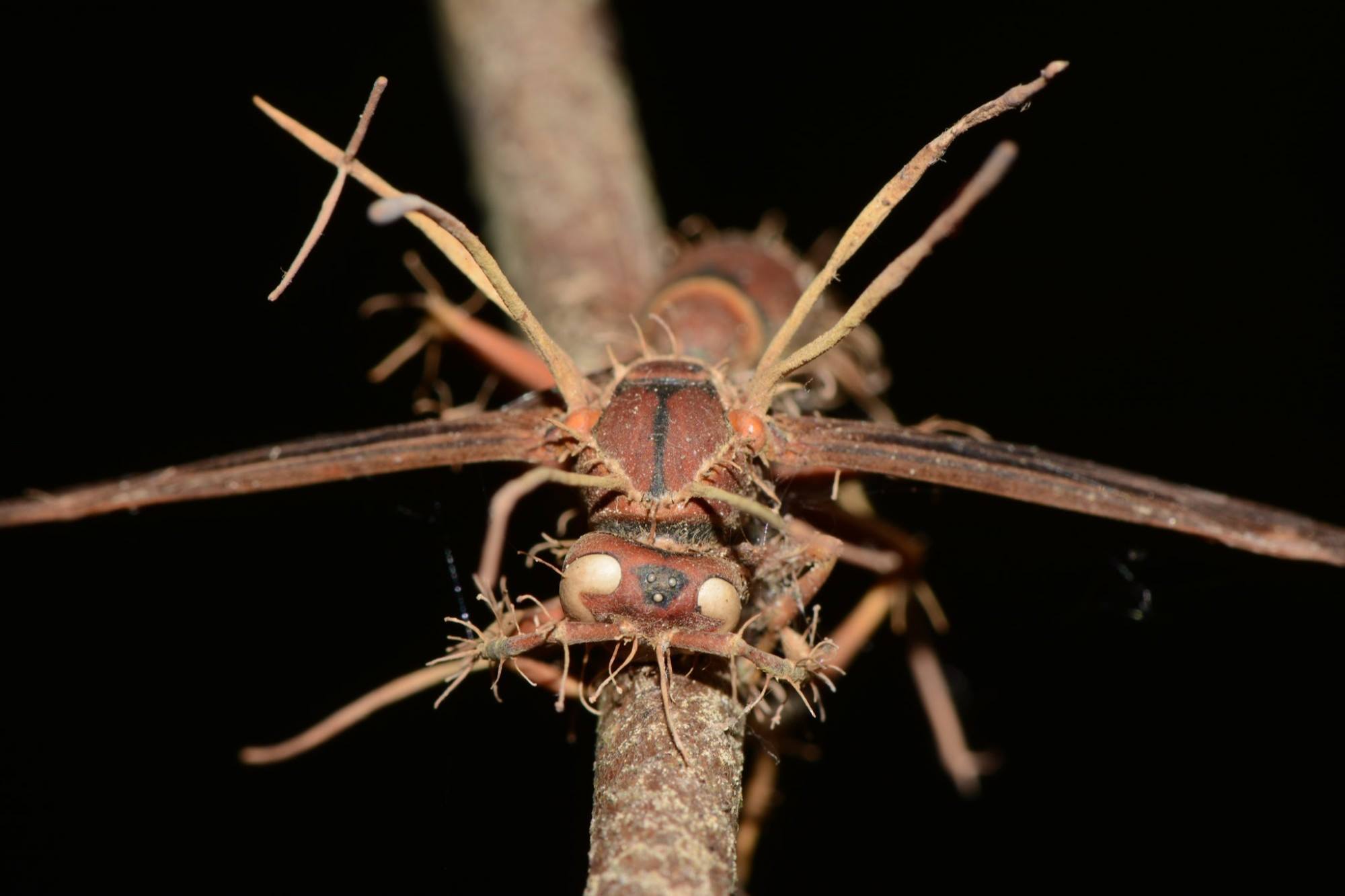 The many fungal stalks extending from this wasp’s head and thorax are clues as to how it met its demise. The final act of this parasitic fungus in the genus Ophiocordyceps was to send these stalks into the air to release spores that might one day infect other wasps. Some members of Ophiocordyceps are known as “Zombie Fungi” because of how they release chemicals in the host’s head to hijack the nervous system. The host then does the bidding of the fungus before its death, walking to a nearby perch that is ideal for releasing the fungal spores. This fungus is all trick and no treat! 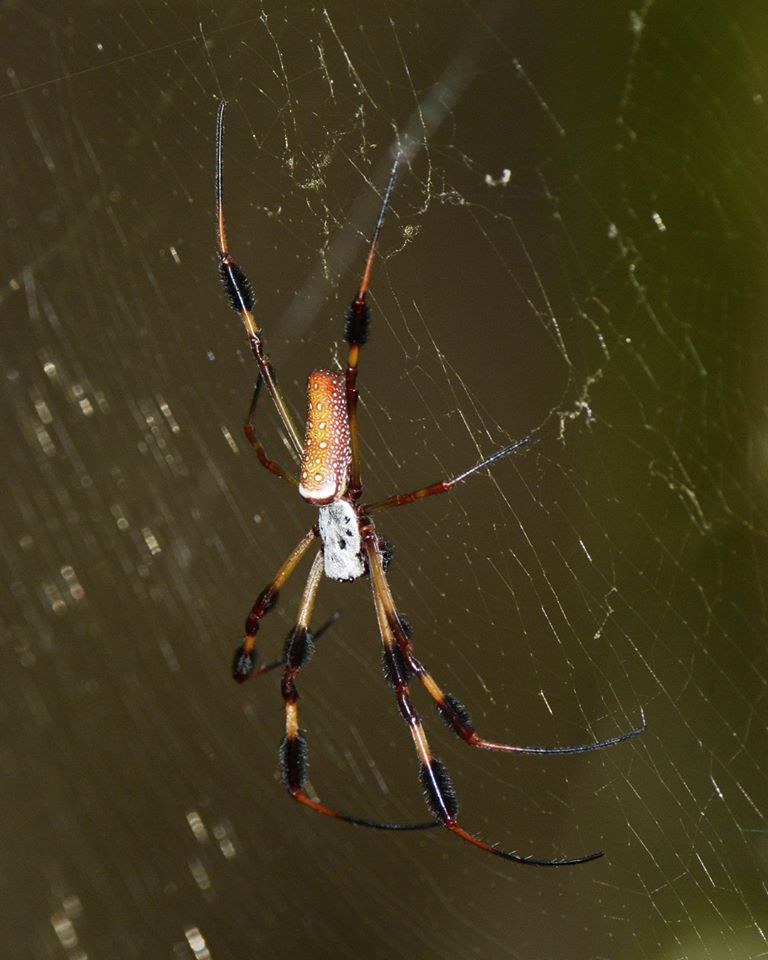 The Golden Silk Spider (Nephila clavipes) is a common sight along forest edges, trails and Lowcountry backyards during late summer. Despite their intimidating appearance and size, they are not considered dangerous to humans, generally only biting when trapped and held. They instead reserve their bite for prey of various sizes from insects to small vertebrates such as bats.

If you look carefully, you are likely to find multiple kleptoparasites in its web, small spiders that seek to steal bits of food when the time is right. It is thought that Golden Silk Spiders eat their prey more quickly than other orb building spiders to reduce the amount of food lost to these 8-legged thieves.

Next Previous
Government Websites by CivicPlus®
[]