Geocaching is a high-tech treasure hunting game played throughout the world by adventure seekers equipped with GPS devices. The basic idea is to locate hidden containers, called geocaches, outdoors and then share your experiences online. People who enjoy geocaching come from all age groups and have a strong sense of community and support for the environment. Source: geocaching.com 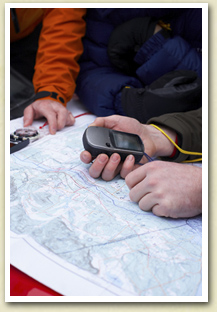 Letterboxing
(Noun), Letterboxing is an intriguing mix of treasure hunting, art, navigation, and exploring interesting, scenic, and sometimes remote places. Someone hides a waterproof box somewhere containing at least a logbook and a carved rubber stamp, and perhaps other goodies. The hider then usually writes directions to the box (called "clues" or "the map"), which can be straightforward, cryptic, or any degree in between. Often the clues involve map coordinates or compass bearings from landmarks. When the hunter successfully deciphers the clue and finds the box, he stamps the logbook in the box with his personal stamp, and stamps his personal logbook with the box's stamp. The box's logbook keeps a record of all its visitors, and the hunters keep a record of all the boxes they have found in their personal logbooks. Source: Letterboxing.org. 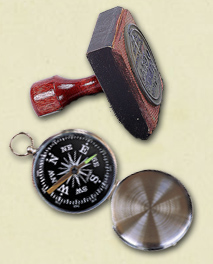